No real social change has ever been brought about without a revolution… revolution is but thought carried into action.

When I speak of diversity issues in tech I don’t mean we should just fight for more women. Historically, when people push for equality certain groups get left behind. During the women’s suffrage movement in the U.S. African-American women still found themselves unable to vote in a number of states and faced racism even at the hands of white suffragists. We can no longer focus on equality for some and make sure that we include everyone in the discussion. If we are to enter into a world of ubiquitous computing without everyone at the table creating the technology that will shape our lives we will find ourselves starved for the talent and creativity required. 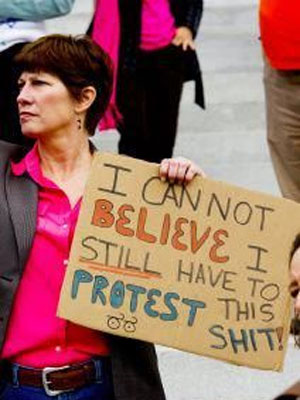 We absolutely must need to recognize tech has a diversity problem. Recognize it and keep it in our heads at all times so we can focus on fixing the wrongs at all times.

Equality is not a concept. It’s not something we should be striving for. It’s a necessity. Equality is like gravity. We need it to stand on this earth as men and women, and the misogyny that is in every culture is not a true part of the human condition. It is life out of balance, and that imbalance is sucking something out of the soul of every man and woman who’s confronted with it. We need equality. Kinda now.