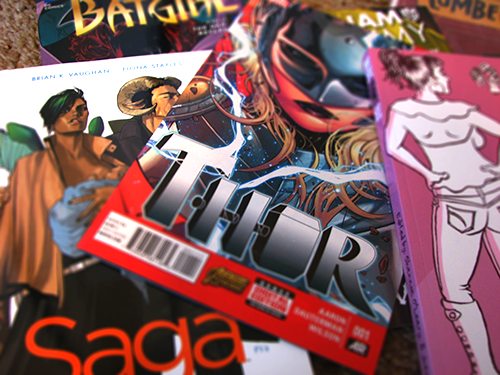 I read comics quite a bit in the past, but I took a bit of a break. I was honestly exhausted with the same sorts of stories focusing on the same type of characters. This is my round about way of saying that I was really tired of the hetero male narrative and never seeing anything really identifiable with any of the characters I was reading. However, I started getting back into comics this year with the news of Ms. Marvel and Lumberjanes and that just opened me up to all of the other awesome comics running this year. Including “The Big Feminist BUT” a collection of feminism comics (skip the afterward though) and “Tomboy” by Liz Prince which resonated deeply with me.

Ms. Marvel just released vol. 1 and if you’re into superhero comics it’s a must read. Muslim American Kamala Khan is an endearing Ms. Marvel who is a fangirl herself which is part of what makes it so enjoyable (who wouldn’t love the chance to take a selfie with Wolverine). I love the art. I love that she is from Jersey. I love that she has an Avengers fanfic.

Lumberjanes just finished their first 8 issue run and you can get a subscription for issues #9-#14 on boom studios. I love this series. Teen girls kicking monster butt and being awesome friends. The characters definitely show that there’s more than one way to be a girl and I love that the camp director is a lumberjack version of Rosie the Riveter.

The new run of Thor just fairly recently started and it is already starting to become a favorite of mine. Confession Time. I’ve always found Thor really boring. I’m sorry. He just kinda is. The new Thor has a woman pick up Thor’s hammer as he is unworthy and is no longer able to wield it. I really like how in issue one the criticism of the change is addressed through Odin and as the issues go on he’s continuously proven wrong.

Gotham Academy is also another fairly new run so it’s hard for me to say a lot about it, but I’ve been really enjoying reading a story that takes place in Gotham that doesn’t focus heavily on anything “bat”. It has a bit of mystery and it’s definitely one of those comics that I find myself wanting to read to get the answers.

Saga has been running since 2012 and its one of those comic series that I had kept hearing about, but I wasn’t sure I would enjoy. I was very wrong and Fiona Staples’ art is absolutely amazing. It’s characters and universe are all sort of “out there” in a way that I thought I wouldn’t enjoy, but I’ve really ended up liking a universe that feels like a mix of equal parts sci-fi and fantasy.

I’ve always enjoyed Batgirl, and Gail Simone does her story justice, especially since it’s incredibly emotional with Batgirl regaining her ability to walk after being shot by the Joker. I’m still a little iffy on the new hip Batgirl that was introduced after Simone’s run, but they have big shoes to fill.

Rat Queens is a solid fantasy setting that focuses on four foul-mouth ass-kicking women. The series lost it’s original artist but now has a new artist (and will be much better for it). The picture below explains just why I love this series so much. 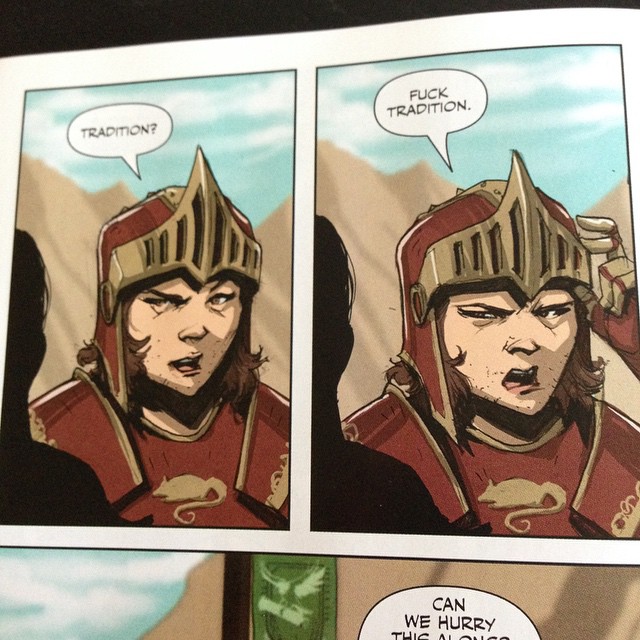 Coming in 2015 is going to be a Spider Gwen series which will focus on Gwen Stacy with spidey powers and started just at the end of 2014 is “Bitch Planet” which Image Comics describes as “Margaret Atwood meets Inglourious Basterds”.